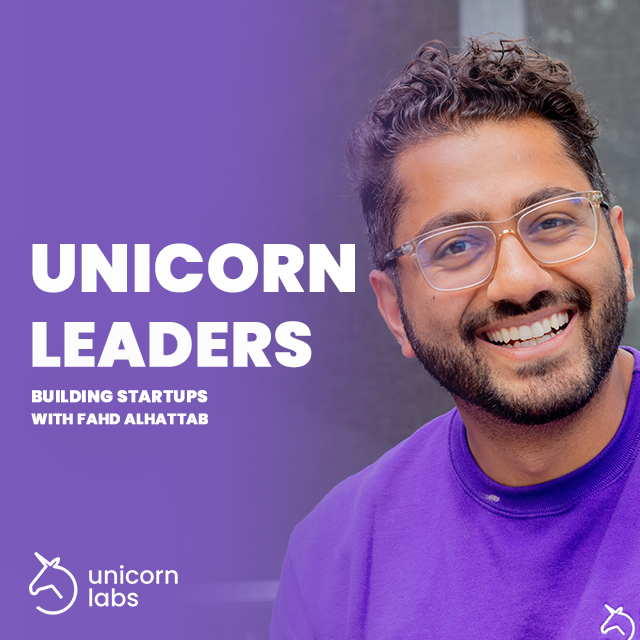 Learn about Fahd's leadership journey, why he started the Unicorn Leaders podcast and what the future of leadership holds.

“Never doubt that a small group of thoughtful, committed citizens can change the world; indeed, it's the only thing that ever has." - Margaret Mead

What is Unicorn Leaders?

Fahd is a consultant, coach, leadership speaker, and millennial workplace expert who teaches new managers how to lead multi-generational teams. He specializes in transformative leadership and team dynamics training for high-growth startups.

He created this podcast to take a deep dive into the world of billion-dollar companies (a unicorn) and what's the secret ingredient before product-market fit.

Join us in this journey as we explore the leadership and environments that create unicorn startups and learn from those with first-hand experience (startup founders, VPs of talent, managers and more).

Every two weeks, we’ll launch a new episode interviewing a great leader so you can get the inside scoop on what it takes to become a unicorn leader and how you can improve your skills to manage an effective team.

Like this episode? Be sure to leave a  ⭐️⭐️⭐️⭐️⭐️ review and share the podcast with your colleagues.

Hello, and welcome to Unicorn Leaders Podcast. My name is Fahd Alhattab, I'm the CEO and founder of Unicorn Labs. In here, we're all about learning how to unlock our leaders' and talent's potential to be able to create high-performing teams and create unicorn organizations.

The idea of unicorn leadership really came to me at a much younger age. I was actually in grade seven... I came across a fun quote that I think many of us have seen over the years, and it's a famous one from Margaret Mead, it says, "Never doubt that a small group of thoughtful, committed citizens can change the world. Indeed, it is the only thing that ever has." As my teacher shared that quote with the class, it was truly the first time that I started to feel a sense of agency, "Whoa, me? I can change something? I can do something?"

I have a say and I have a particular way of doing things if you will. I don't have to just listen to the adults around me to tell me what to do. Perhaps many of us have had a moment like that in our teenage years, in our childhood, a moment of realization of agency of our own self. Leaders tend to have that moment, too, and they build on it. Leaders across the world were able to attract others, attract groups, attract teams to fulfill certain visions, certain ideas.

For me, my journey was fun.

I started getting involved with a local community center, the Boys and Girls Club, as a youth worker, coaching kids, playing soccer, playing basketball, and other sports. I would say it was my closest way of getting paid to play basketball. Never made it to the NBA, but got paid.

Being part of the club installed a unique sense of purpose in me and my colleagues, we change one kid's life. Change a single kid's life? That was the purpose. That was the moment that started my journey on leadership.

I felt empowered by my leaders in that community. They said you can change another person's life by your actions. I had my leaders, my mentors, but then, I was empowered to be a leader for the younger folk in my community, and that is what got me started on this journey.

In high school, a group of friends and I started a camp in our community to try and give back and really help the children there. And so, we shifted from thinking about helping one kid, save one kid's life to, "Hey, can we actually improve an entire community, a group of kids, a community as a whole?" That got us into doing a ton of fundraising.

Throughout our years, we raised over a million dollars for local charities. We shifted our impact lens from one child to one community, to fundraising, because fundraising was seen as this way to build capacity, capacity to believe to unlock the potential of all the other youth workers and charities that were working at the time.

As I got into this whole fundraising route and then realized, there's some limitations on how I can make an impact.

In university, I got super involved in politics, whether it was local municipal politics, provincial, or federal here in Canada. I was even involved as a student politician or student politics. I was president of our student union at Carleton University which allowed me to understand the structures and impact of policy, ND the structures of advocacy. How do we actually change something that can be made better for the folks around us?

When I found entrepreneurship was this like, whoa, I could do it all on my own. It was this freedom moment of, I can create impact without the limiting structures of politics or charity, and I could bring other people along.

I started working for a number of different tech companies. We launched our own a startup, called Frank has a phone. Some of you listening to this podcast may remember that crazy mess of ours. But we tried to push boundaries on what we could do with tech, what we can do with different opportunities.

I found myself in this mixed space of technology and education, of trying to help folks who are building technology and building really powerful teams. And it was an interesting space to be in. It was all about building teams and helping leaders. It brought me back to my time with student politics, where we had built several teams over years.

It brought me back to the camp we started (referenced earlier). We built several teams over the years. And it was this realization of, whoa, well, I've been bringing people together and building teams since I was 13 or 14, and we've been trying to identify a vision and get people there, get to that vision and build high performance along the way. So, can we do this with tech?

Tech presented this opportunity to really solve some of the world's biggest problems, and we could do that by unlocking the potential of the managers and the leaders. This came true to me when I realized that a lot of people were complaining about 9:00 to 5:00. There was also this whole movement in social media that your 9:00 to 5:00 sucks, and you should quit and you should be an entrepreneur.

Goal of the podcast

The goal of this podcast is to unpack the strategies around leadership, around talent retention and around building high-performing teams.

What do we have to do to create powerful teams in our companies in order to solve the huge complex problems that we've taken on?

The problem we've seen in leadership is that a lot of people are still based on this old command and conquer leadership style. It's interesting, there's so much military rhetoric that shows up in business, but we're not in the military. We're building a business. We're solving customer problems. We're solving problems for communities, for people, yet we have this commanding style of hierarchy in our leadership practices, or we see a ton of leadership styles that focus on motivation.

Often, people come to me and say, "Fahd, we're looking for a motivational speaker to come and get our people going." I said, "If you need a motivational speaker, you've got much bigger problems in your company than motivating your people and getting them to be hurrah in a little pep rally." Motivation is a result, it's not an input. It is something that comes out, and it's a result from highly engaging problems that our people get to work on, who are empowered.

Let's look at this word 'empowered,' because I think it's overused. Empowerment is not binary. It's not either your empowered or not. Empowerment is a spectrum and it's broken down into levels.

Our goals is to increase those levels of empowerment, because in the large companies, things don't happen. They only happen when you have small groups of people. And why is that? Because smaller groups of people are more empowered because we push decision making down to those who are closest to the problem, closest to the information, instead of pushing decision making up as we see in government and larger bureaucratic structures.

When we push decision making down, we get people testing faster, we get people making decisions faster. And we actually, as many startups would say, we go ready, fire, aim. You're able to actually get stuff out there and iterate it faster.

The truth of what we've uncovered is that if we can really hone in on the leader and help leaders in teams, not just the CEOs and the C-suite of teams, but even the managers, if we can help unlock the leader's potential, they create significant high-performing teams.

I know that question sounded confusing, but here is the meaning, we've all been on teams where it just sucks to work on that team, you actually become worse than improving. Why? Well, we're unpacking what leaders do in order to create this team that has disproportionate impact on individuals. In order to do so, we're going to have to unpack these concepts of psychological safety, of empowerment, effective communication, productive conflict, synchronizing teams, leadership styles, coaching, different stylistic fluidity, and personalities. All of these concepts will guide us on how to create a sense of impact, value alignment, and finally, how to really foster an effective vision.

I always find funny that teams will start with fostering an effective vision first, and then think we've had the model flipped.

While having a vision is extremely important, having a team that trusts each other, that has good bonds, and that is empowered will be way better. Because as many startups realize, the vision iterates, they pivot, they change.

We are constantly changing what we're trying to solve in the problem as we figure it out. Therefore, if everything depended on that vision, it wouldn't change. Everything actually depends on the team and the quality of their leadership.

So, that's the arc we're going to learn about here with this podcast.

We're going to ask them some hard-hitting questions.

In this podcast, we're going to question some pre-existing mindsets. We're going to look at what skill sets we need to develop, and then provide some tool sets for you to actually walk away with, in order to create your high-performing team, in order for you to create unicorn leaders that build your unicorn start ups. 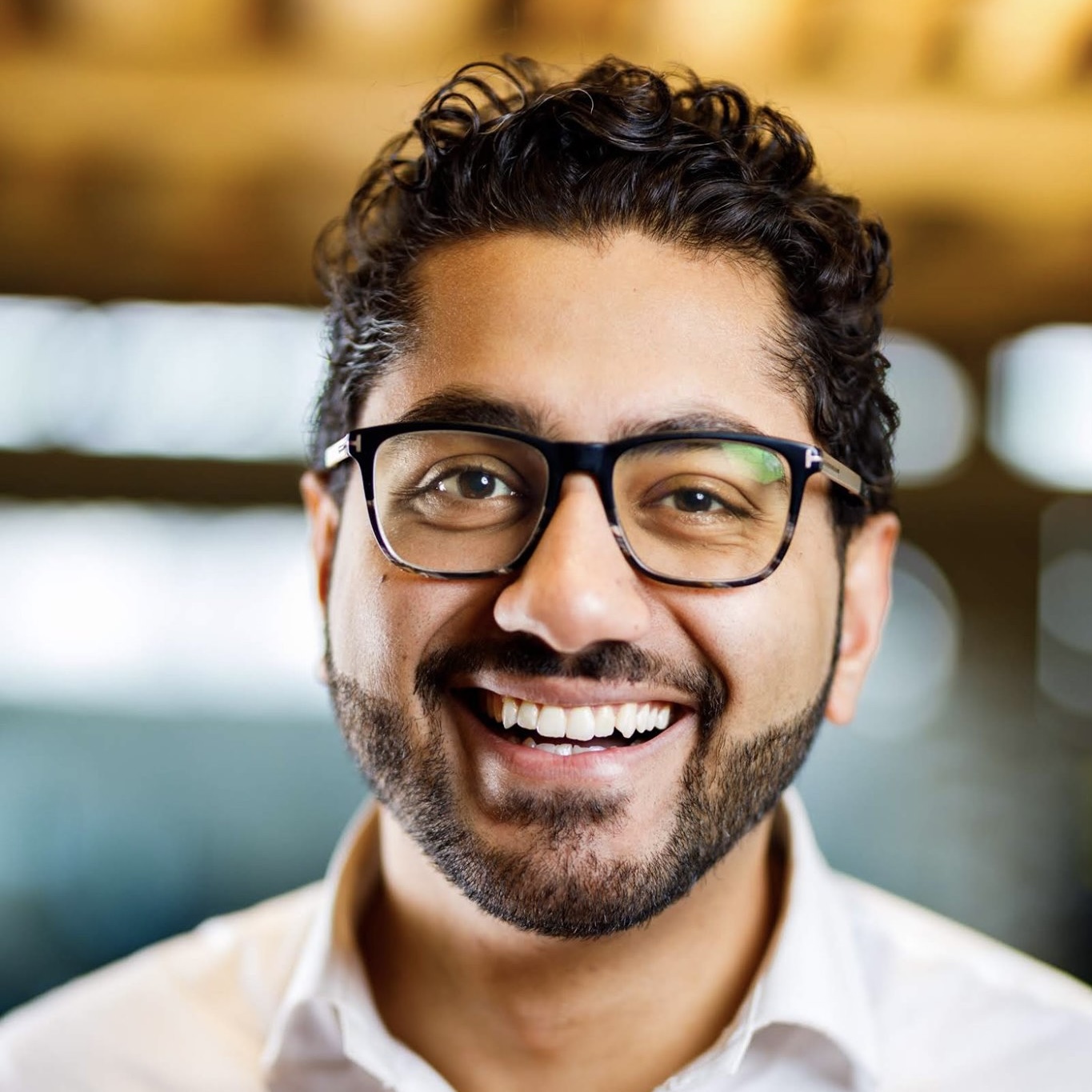 Fahd is a consultant, coach, leadership speaker, and millennial workplace expert who teaches new managers how to lead multi-generational teams. He specializes in transformative leadership and team dynamics training for high-growth startups.